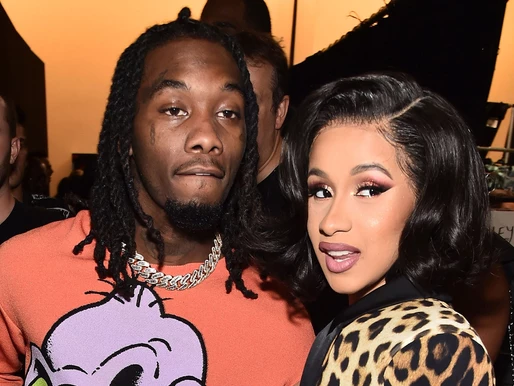 Less than 2 weeks ago, American rapper Cardi B filed for a divorce from her husband, Migos rapper Offset. The couple had been on again, off again, then back on again since secretly tying the knot in 2017.

Cheating came into play along the way on the part of Offset. And even though she walked away then, the two reunited, with the WAP singer declaring she wanted to make her marriage work. In that same year (2018), they welcomed their daughter, Kulture, and officially became a family. But last week, a post on Cardi B’s Instagram story surfaced, stating that her heart finally told her to stop wasting her time. This hinted at trouble in paradise. News broke of the split soon after, crushing the hearts of many fans worldwide.

Some have approached the stages of denial and anger as it relates to the pair parting ways, casting blame for the demise of the marriage on the WAP. How ironic is it that the one who has committed adultery (and rumoured to still be doing so) is free from the fire, but the loyal lady is thrown in the pit? This sparked an interesting discussion into the reasons a couple may choose to stay together or separate.

Jamaican-Canadian registered psychologist Sheryl Symister-Allen, of Step by Step Psychological Services in Edmonton, Canada, explained that, before anyone plays the blame game, they should consider the party who has`to make this choice first. “It takes mental tenacity to make a decision to leave a marriage. Then it takes another leap of bravery to actually leave. Cardi B is a public model of what can happen when you choose to walk away. You face public scrutiny and you’re marginalised because you’re a woman,” she told Entertainment.

Before we go any further, let’s examine gender division and expectation. For centuries, women have been seen as the caregivers and nurturers of the family, breathing life into the unit while functioning as the glue that holds everything and everyone together. Men are viewed as the providers, particularly when it comes to supplying financial security, and the protectors. He can have multiple affairs and all can be forgiven. What happens when the lines are blurred? When a woman doesn’t cook or clean, but makes her own money to provide for herself and her family, or when a man may provide financially but it isn’t a necessity and then fails to protect his woman’s heart? A marriage can survive infidelity. But what if it is a reoffending act?

Because Cardi B has rejected the expected gender roles and chooses to put her worth and happiness above all else, society claps back by saying her ‘WAP’ wasn’t enough to make the marriage work. It is statements like these which make it difficult for women to walk away from miserable unions. “That’s why some people stay in unhappy, abusive marriages; to keep the family together and to avoid the scrutiny of others,” the therapist highlighted. Symister-Allen made sure to point out this disclaimer, “Couples can separate, attend therapy sessions and work towards saving their marriage. Other couples can separate and live amicably.” But she shares that we need to foster and facilitate more open discussions about gender division while embracing the fluidity in expectation, so that if a marriage breaks down, gender is not seen to be at fault. “We need to keep these discussions open so that people will feel more comfortable in talking about their problems rather than living a life of misery for the sake of love. We also need to be cautious about where we lay the blame when a marriage ends.”

She also made significant mention of the fact that people should be mindful of the psychological effects of stigmatising and shaming that are placed on a man or a woman who leaves a marital relationship. “They are going through a lot by taking this step, and comments from external parties are only adding insult to injury,” she said. So, instead of throwing all these stones, how about focusing on your own glasshouses? People have enough problems.

Meanwhile, Cardi B has seemingly gone through the five stages of breakup to acceptance, and has chosen to part amicably, co-parenting their daughter separately. Many tried to ‘offset’ her with the divorce. But it’s game on for the super rapper who is busy making new music. The recent release of visuals to the track, Me Gusta, features Annita, herself and Myke Towers.

Sheryl Symister-Allen, a Registered Psychologist and is part of the Alberta Black Therapists Network. She is accepting clients online.

No comments to show.